"...a great storyteller—no half-bored professor intoning a history lecture here." -- AudioFile, September 2013
​"...one of the more accomplished audiobook narrators at work today, and his range is extraordinary..." -- Salon.com, September 2012
​"...Hillgartner's phrasing and pace are nothing short of remarkable…a real treat." — AudioFile, October 2014
​"His voice has the authoritative, assured presence necessary for a story..." — AudioFile, October 2013 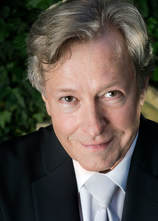 Welcome to my home online. I've been a professional actor, playwright and songwriter for over 30 years but only began recording audiobooks in late 2007. Since then I've recorded over 250 titles for multiple publishers: Blackstone, Brilliance, Tantor, Highbridge, Hachette, Macmillan, Penguin, Audible, and more. Along the way I've won a VoiceArts award, multiple Earphones awards and was named a Best Voice of 2013 by AudioFile. Although I love working in all genres (and have had good success, with Earphone wins for projects as diverse as Rosemary Wells' charming children's book On the Blue Comet and the classic sci-fi of The Collected Stories of Philip K. Dick), lately publishers have turned to me often for big biographies and histories: The Patriarch by David Nasaw, Lawrence in Arabia by Scott Anderson, George F. Kennan by William Lewis Gaddis, Directorate S and Ghost Wars by Steve Coll, to name a few. My work on Walter Isaacson's Kissinger won me a Best of 2013 as well as another Earphones award. I've also had the unusual pleasure of narrating another author's take on the same biographical subject: Niall Ferguson's Kissinger: The Idealist. I've found that I love the challenge of doing these "big" books: they require a degree of stamina and commitment to detail that is often daunting but really rewarding if you can pull it off.
A few years ago I had the pleasure of narrating sportswriter Jeff Pearlman's devastating biography of Walter Payton, Sweetness. We've stayed in touch (I also narrated his wonderful book about the Magic Johnson era LA Lakers, Showtime) and some time ago Jeff interviewed me for his blog, The Quaz.
Here's a link to an AudioFile narrator profile.
And lastly: it's always gratifying to get awards and good reviews from listeners and industry folks alike. But when the author of a book you've narrated likes what you do and tells you so, well, I've just got to share the letter. It's the best recommendation I've ever had. This is from Michael Clarkson, author of The Age of Daredevils:

​"Suddenly, I have more than one voice. My narrative voice has been joined most welcomely by Malcolm Hillgartner. Malcolm is an outstanding performer, but he doesn’t try to upstage my book. He puts it on stage. He gives legs to my verbs, illuminates my descriptions in technicolor. In his phrasing of delicate issues, he has my paragraphs in his hands like he’s holding a dove. He’s old-fashioned when it’s called for, and in the case of this book, it often is. His portrayal of the characters’ emotions makes you feel the way they do. He can be earnest, or adventuresome. His dialects are snappy, and fun. My wife says his voice is sexy. His pauses contain as much drama as a plunge over Horseshoe Falls. He plays my cast of characters as though he’s friends with them. When I listen to the CD in the car, the bumper-to-bumper traffic disappears, and I’m in Niagara Falls in the 1920s. I am also a professional speaker, and offered to do this audio for my book. I thought I was the only one who could tell this story. But my ego knows this is best in Malcolm’s repertoire, his range, and his pacing, which fluctuates from the sometimes slowness of the Red Hill family’s personal lives to their frantic battles with a dangerous world wonder. As well, thank you, BrillianceAudio, for the overall technical excellence of the nine-plus hours of this work. I never thought I’d enjoy a duet so much."