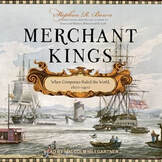 Audiofile Earphones Award 2022
​For listeners who relish history on a grand scale, this audiobook indictment of the great European trading kings will be riveting, and eye-opening. Dictatorial and insatiable, these weren't capitalists but monopolists--Clive in India, Simpson in Canada, Rhodes in South Africa, figures forgotten today who nevertheless shaped national boundaries and plundered whole subcontinents. Narrator Malcolm Hillgartner, a favorite of those who listen to serious nonfiction, is especially effective in cutting these once-towering figures down to size. His steady, even, judicious tone makes history's judgment of the Russian colonization of Alaska, and the Dutch East India Company's ruthless behavior in the Spice Islands, all the more implicit. D.A.W. Winner of AudioFile Earphones Award © AudioFile 2022, Portland, Maine [Published: MARCH 2022]

Audiofile Earphones Award 2020
In this meticulously researched tome, the fates of one million displaced persons who were left without homes as a result of WWII are presented with clarity and precision by narrator Malcolm Hillgartner. Nasaw deftly interweaves the personal and the political, juxtaposing the postwar strategies of the Allied nations and several international organizations with distressing personal histories of those who lost everything except their lives. Hillgartner is particularly effective at conveying the accounts of concentration camp survivors, forced laborers, and other displaced persons who had no option but to remain--sometimes for years--in refugee camps, awaiting possible resettlement in Israel, the U.S., and other nations. A powerhouse treatise is enhanced by a riveting narration. M.J. Winner of AudioFile Earphones Award © AudioFile 2020, Portland, Maine [Published: OCTOBER 2020] 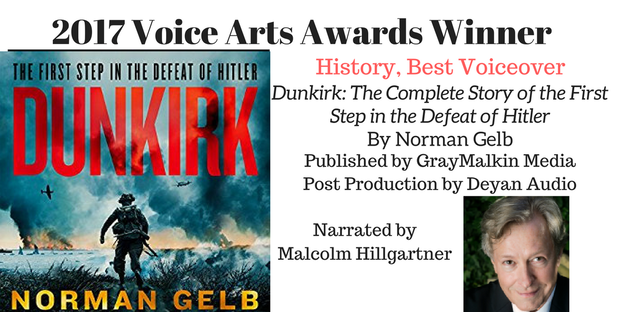 BEST OF THE BEST 2018—SoundCommentary.com
EDITOR'S PICK, March 2018 —SoundCommentary.com
"...Dark Echoes of the Past is juicy detective noir that refuses to be separated from Chile’s frightening history....Reader Malcolm Hillgartner strikes the right tone..., and smoothly handles Spanish proper names and places. His voice is deep and brusque, and sounds like it comes from a man who has seen his share of horrors...."

BEST OF THE BEST 2014—SoundCommentary.com
EDITOR'S PICK, November 2014 —SoundCommentary.com
"Narrator Malcolm Hillgartner's outstanding reading is measured, exacting, and respectful of the complicated issues.  His French and German are perfect.  When Paris Went Dark  is deservedly on the list of nominations for The National Book Award...Highly recommended, eye-opening history."

EDITOR'S PICK, March 2014—SoundCommentary.com
"What also comes across in this "true story of greed and corruption" is the disaster that is West Virginia now on so many levels… The Price of Justice is very well written, enlightening, and highly recommended...Malcolm Hillgartner's careful reading made these intricate legal cases...accessible to this lay listener…"

BEST MEDIA 2013: LIBRARY JOURNAL
"Anderson’s fun and informative popular history chronicles T.E. Lawrence’s experiences in Arabia before, during, and immediately after World War I. This work tells as well the stories of three other spies: a Palestinian Zionist, a German agitator, and an American oil company employee. Their tales weave in and out of Lawrence’s narrative and are also used to show what was happening in other areas of the Ottoman front. Malcom Hilgartner’s clear reading allows the well-paced writing to deliver an engrossing experience. (LJ 11/15/13)

ALA Starred Review
"Kennan is one of those figures of 20th-century history who remained anonymous to most Americans, yet his work as an American diplomat played as large a part in our nation’s Cold War policies as any president’s. In fact, knowledge of Kennan’s life and work is essential to an understanding of the Cold War.

Audible.com Best of 2011
”Malcolm Hillgartner narrates Stephenson’s film-like, hyper-detailed descriptions with an American tough-guy feel—urgent with no unnecessary emotion and intelligent without showing off.” (AudioFile 2011)

BEST OF THE BEST 2011, SoundCommentary.com

"What could be more grand than a boy, time travel, and trains?...Narrator Malcolm Hillgartner movingly presents the happy home and compatible family that will soon be separated. He also captures prickly Aunt Carmen, dear Mr. Applegate, Dutch (Ronald Reagan), and Alfred Hitchcock on the eventful odyssey. Subtle lessons about American history, poetry, and trains are perfectly rendered. This outstanding audiobook is ideal because the story is lengthy and complex at times. Since history seems to be repeating itself, Oscar would be at home in today’s USA." (AudioFile 2010)

"[Cheever's] story here is told by a narrator of unusually subtle gifts. Bailey’s book is as lively (and squalid) as his subject but quite dense, an attribute Malcolm Hillgartner overcomes with wondrous pacing and inflection. So in command is he that with the merest pause, he clearly indicates the beginning and ending of quotations or a shift in perspective. And his unfaltering impression of Cheever’s Brahmin accent—wholly invented by the writer—rings with acerbity, humor, or pathos. Cheever is very much alive in this reading." AudioFile 2009)